Having cropped sensor Canon DSLRs in the form of the 600D and the 7D I’ve acquired a range of budget and pro spec lenses. I mostly have primes for shooting video/film in the form of the Tokina 35mm, Canon’s 24mm f1.4 and 50mm f1.4/f1.8 variants. The Tokina 11-16 wide zoom is in there too.

In preparation for my video shoot I took the Canon 7D on test with these range of lenses. http://www.youtube.com/watch?v=ey-npUSM1Po&feature=share&list=UUFCN1av1-tVLnhT8P0Y3LbQ The settings in camera were neutral with sharpness, contrast and saturation tuned down – usual dslr settings for film. Now whilst I got some great images and clean shots something was missing. The images appeared just a little soft and in grading colours did not pop as I would have liked. And this may of-course been due to low light conditions.But I couldn’t help but feel something was missing.

Having continually read during research on filming with DSLRs that its not the camera but the lens that is important, I decided to push the boat out and acquire a good (and what I call) all rounder. What I really needed in my arsenal was a mid-range zoom. Options included the 24-105mm L lens or the 24-70mm f2.8L. Either would be my first foray for an L branded lens. Had I gone on price alone, the longer range lens would seemingly offer a better deal at £580. However, at the time of purchasing Canon just released the usm II version of the 24-70. All reviews, including those from trusted sources such as Ken Rockwell (http://www.kenrockwell.com) and Michael Maven (http://michaelthemaven.com) indicated this new generation of lens was the one to get.

With the lens costing almost double the camera it was going on at £1470, best price was an important aspect of the purchasing decision too. DigitalRev provided the best “trusted source to price ratio” (TSPR). I purchased from them before via Ebay though this time I shopped direct (http://www.digitalrev.com). A security email and response within 24 hours and the lens arrived 4 days later.

To say that I am blown away with its performance is an understatement. Both for photography and filming it is the first lens in the bag. And each time I use it I get more impressed. I have been reviewing some of the music video footage we shot using it paired with the Canon 7D. In post, even under extreme magnification and zooming, the images remain sharp. In fact there is little need to add sharpening back in post despite it being reduced in camera. Colour needs little if any correction and so time spent on grading is for artistic reasons only – look and feel. 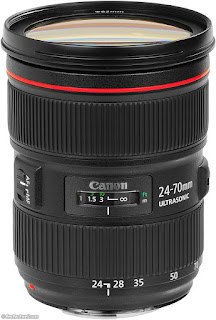 We take it out on Day 3 of the video shoot tomorrow and I am looking forward to the day, if for no other reason than to continue putting this lens through it’s paces.

My prime lenses remain relevant, I continue to be impressed by the Tokina 35mm especially for portrait and close ups. However, with constant f2.8 throughout the focal range, the latest Canon 24-70mm incarnation offers a very useful option especially for travelling light.