I’ve succumbed! Full frame frame DSLR and an external recorder acquired this month in the form of the Canon 5d Mk III and Atomos Ninja 2. Shall we call it my early birthday present?

I had considered the Canon C100 but three things affected my decision – price, price and flexibility. Whilst I’ve read good reviews of the C100 it seems it really needs an external recorder like the Ninja 2 for recording footage that can be better manipulated during editing and grading.

The stock 5d MkIII camera body costs 50% less than that of the C100! Also affecting price were additions to both cameras that I would have to purchase which would push the budget upwards.

Ideally for the creative process, footage should be captured with as much colour resolution as possible for manipulation in post (edit, motion graphics and colour grading). Both units capture footage in 4:2:0 only. 4:2:0 retains only quarter the colour (Chroma) data of the luma for any given resolution. 4:2:2 has half the colour resolution.

4:2:0 may generally look good to the eye, but if you need to do heavy manipulation, like green screen, it can result in distortion around objects. This becomes increasingly noticeable with high contrast coloured areas when using graphics and titles. This is where the Ninja 2 field recorder comes into play as it records 4:2:2. There are many other benefits which I won’t go into now but you can check them out here … Canon 5d mark III firmware (hdmi output) and the atomos-ninja 2 recorder. 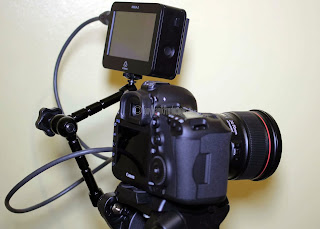 The Mk III offers significant flexibility in that not only can stills be captured alongside video but the much hyped break through in RAW video capture, means that there may be a further aspect of longevity for the 5D over and above the C100. Of course, full frame is another key factor.

I took the bare bones 5D out to test this week for a corporate shoot. The environment required a more ‘run and gun’ set up for cutaways, etc. I used the camera with 20-70mm zoom lens and a monopod. For interviews a tripod. No need to state that the footage looks great but I feel this type of situation may have been an area more suited to the C100.